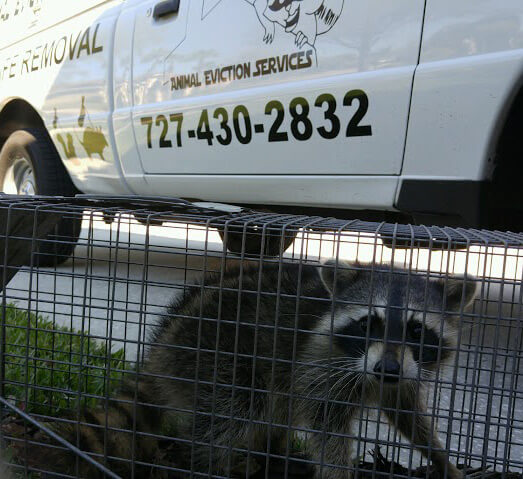 Raccoons are one of the smartest animals in Florida and are very adaptable to different types of environments. Raccoons are generally nocturnal, but have been known to become diurnal when food availability requires them to do so. In urban environments, raccoons have become very good at exploiting the weak points of a home in order to gain entry into the attic.

Raccoons will usually have one litter of 3-5 per year. They will usually give birth to their young in the spring, but have been known to give birth nearly year-round in Florida.

Although raccoons can be very cute, they can also be extremely dangerous and can cause thousands of dollars in damage to your homes wiring, insulation, drywall and your air conditioning duct work. When raccoons get into your attic, the odors and pheromones they leave behind are like an invitation for other animals and rodents to come join the party. Raccoons will generally defecate in in the same spot over and over and can even hide it similar to the way a cat would, which can make finding evidence of their presence a challenge until they do significant damage.
Raccoons can carry various diseases such as rabies and can carry fleas and ticks as well. Their feces is also dangerous and can carry leptospirosis and other dangerous diseases such as histoplasmosis which can be contracted by humans through breathing in the toxins. Symptoms can range from mild flu like symptoms to hospitalization. Rabies on the other hand, is 100% fatal if untreated, but can only be transmitted through contact such as a bite or scratch. If you have been bitten or scratched by a raccoon, it must be trapped and tested for rabies immediately.
Since raccoon removal comes with so many risks, hiring a professional is a must in order to safely evict them. Call us today and we will remove the raccoons, close all the entry points and disinfect and deodorize the areas where the raccoons were residing.