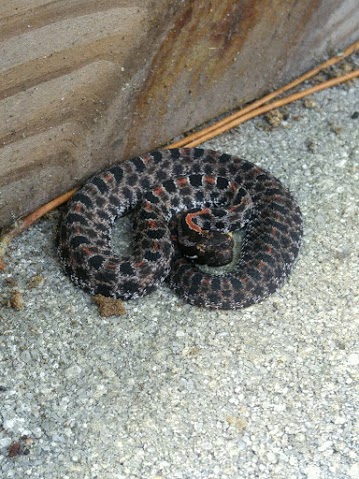 Snakes can strike fear in the hearts of many people, even though they are an essential part of the Florida ecosystem. Snakes help control the rodent population and are also an important food source for other animals. Some non-venomous snakes will also feed on venomous snakes.

There are only 6 different venomous snakes found in Florida, and only 4 of those species are found in the St. Petersburg and Tampa bay areas. The four venomous species found in this area are the Eastern Diamondback Rattlesnake, the Pygmy Rattlesnake, the Coral snake and the Water Moccasin or Cottonmouth. Some common non-venomous species include the black racer, corn snake, yellow rat snake and the banded water snake.

Even though non-venomous snakes cannot kill a human, they still pose a threat to humans and animals since they can carry various parasites and salmonella. Their feces can also be harmful to pets if eaten.

Since identifying snakes can be difficult and handling any snake carries a risk, it is best to be left to the professionals. Snakes should not be killed because they are such an important part of our ecosystem, so rather than killing them, Call us and we will safely remove and relocate the snake, inspect your property, and if needed we will trap and place deterrents to prevent any more encounters.

Snakes many times are found near homes due to underlying rodent issues, so we will also inspect for any evidence of rodents so we can address the true source of the problem.